Tests and tornadoes: a Huntsville tale

Recently, Facebook reminded me of my Irish in-laws’ last trip to Canada, 10 years ago. There were pictures of my parents, looking so much more youthful even in their 80s, and of May and Rennie, smiling and playing with the kids, who were two and five then. The kids are so little, sweet little faces that obviously adore their Nanny and Granda. They are snuggled next to them on a bench in Elora or being pushed on a swing by one of them. Nanny and Granda had infinite patience, deep love for our children. Their gentle and expansive acceptance of our spirited kids just as they were set such an example for unconditional love.

It was Nanny and Granda’s final trip to Canada, although we didn’t know it at the time.

They always came for three weeks when they visited us. Ten years ago, it was no different. We had rented a cottage near Huntsville for the first week of their visit. And that is the story I’ll tell you now.

The cottage was on a quiet lake. Because of the heavy iron content in the water, it was a brown lake – not water you really wanted to swim in. The cottage was a long bungalow with the requisite dark paneling, vinyl seating and lots of games and water toys. We slept in a bedroom at the end of the hall, in a lumpy double bed; the kids had the bunkbeds in the bedroom across the hall, and May and Rennie slept in a third bedroom.

The first night, Eva, our two-year-old daughter, woke incessantly, crying. Every 15-30 minutes, she’d awake with a cry. Eventually, exhausted from constantly getting up to soothe her, we brought her into our bed. The second night was much the same. And the third. All week, only with momentary reprieves where she slept for a few hours at a time without waking, she kept us from getting a full night’s sleep.

An aside: on our return home, I made a doctor’s appointment for her, and we discovered she had sleep apnea, the result of rather large tonsils – “Her tonsils,” said the doctor, “are the size of meatballs!” – and had been reacting to some sort of dust or mold in the cottage. One tonsillectomy later, the sleep apnea was gone and we all got better sleep.

Our week was generally uneventful, activity-wise – we spent a lot of time playing in the water with the kids, building campfires, doing a puzzle and taking walks. But Rennie wasn’t feeling well all week. It was much more than jetlag. He had no energy, began running a fever, and preferred to stay in the cottage in bed.

As someone with CPD, he had chosen to travel without insurance this time. Insurance is expensive if you have a pre-existing health condition, and he thought he’d be fine. So, we didn’t push him. We let him languish in bed, or sit in the armchair, because that’s what he said he needed. He said he’d be fine, and he’d feel better soon. So, we waited for him to feel better.

By midweek, he rallied enough for us to take a drive to Barry’s Bay, across to the other side of Algonquin Park, for the day. Our return drive terrified all of us, except for our daughter, who was fast asleep in the back. There had been tornado warnings throughout the province that day, and by the time we drove back into Algonquin Park on our way back to the cottage, the sky had turned yellow and it had started to rain. The wind picked up, and the trees bent under its strength. The rain pelted harder and harder, so hard at one point we had to pull over to the side of the road because we couldn’t see more than a foot in front of the vehicle. Even with the sheet lighting that illuminated the sheets of rain.

I turned on the radio. CBC news reported a tornado had set down five hours’ drive away in Durham and in Markdale, my hometown, where my parents still lived. I grabbed my cell phone to call home. No cell service. With my husband white-knuckling the steering wheel, and my in-laws white-knuckling it in the back seat – they’d never seen such severe weather in their 70-odd years – I felt the adrenaline kick in. I love a good storm, but this was epic. The storm lasted a good half-hour, and our slow, careful drive through the lightning, thunder and driving rain eventually brought us to the edge of the park. The sky, still stormy, began to crack into clouds tinted with yellow and pink. 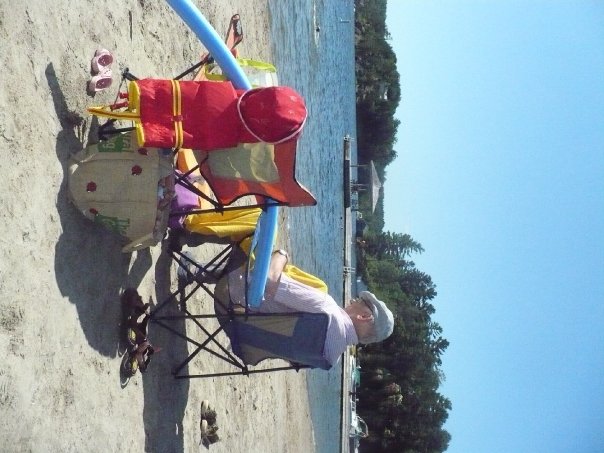 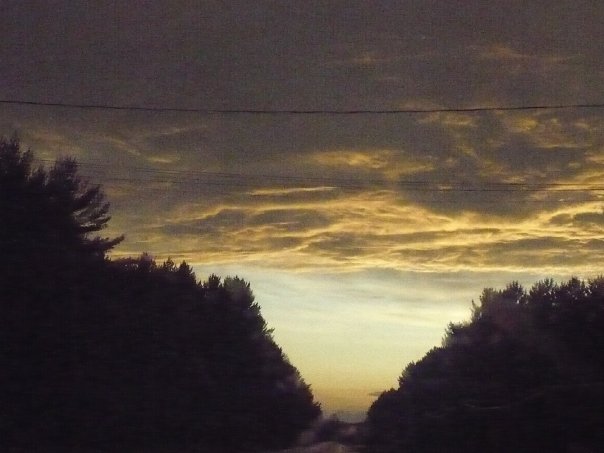 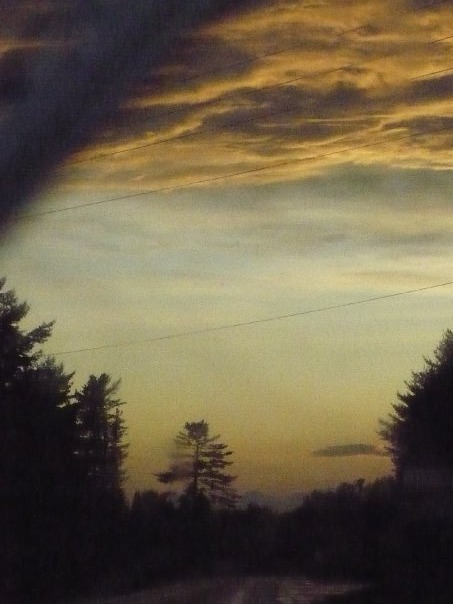 We all drew a deep sigh of relief. I tried my parents again, and this time got through. The yard was a mess, but everything was fine at home, although, someone had died when the tornado touched down in Durham. I phoned my sister who lived close to Durham. She, too, was fine, but many of the trees around her house had suffered the ill effects of the high winds.

Relieved to walk back into the cottage, we passed a quiet evening and crawled into bed early. The next morning, Rennie awoke listless, pale and had difficulty breathing. He was truly ill and it was apparent he needed to see a doctor. Despite his protests, we took him into the Huntsville hospital emergency room. Small-town hospitals are often underfunded, and service suffers because of it, but not here. They took very good care of my father-in-law.

After CT scans and blood tests, the doctor – who was from Belfast herself – determined he had two blood clots on his lungs and needed to be admitted. When we explained he had no travel insurance, she waived her fee. He was admitted to hospital. Word about the lovely and genteel gentleman from Northern Ireland soon spread among staff, and he got the best care our public health service could offer. Given his lack of insurance, each day in the hospital cost about $3,000, and each test hundreds more. We worked out a deal with staff that he could stay with my husband in the Days Inn down the hill for $64 a night – the hotel had a special rate for families of patients in the hospital – as long as he came back each morning for a check and further tests. Deal. By the end of the ordeal, and prescribed a week’s worth of antibiotics and clot-busting meds, my father-in-law began to feel much better.

May helped me pack up the cottage. Our week had ended, and we had decided Mark would bring me, the kids and his mum home to Kitchener and return to Huntsville the same day with his mum to help his dad navigate our health system; they’d all arrive home a couple days later to continue the care in Kitchener.

He unpacked the van, and we decided to send some clean laundry up, so I put some clothes in the wash. A week’s worth of dirty clothes for six people meant there was a lot of laundry. I put on the first load, and went back upstairs to make some food.

Bang, bang, bang went the washing machine during the first rinse. Thump, thump, and then nothing. Sighing, I went downstairs and discovered the machine full of water, but no amount of switching on or off or emptying the tub would make it move.

Sometimes when you’re down, life likes to give you a good kick to keep you down. Our week had been days of illness, sleeplessness, exhaustion, some sunshine and water, and a lot of time spent inside the cottage, the van or the hospital. All I wanted to be was home. I couldn’t help my father-in-law, but he was in good hands. I just needed to be surrounded by familiar things, sleep in my own bed and get the schedule back to some sort of normal.

The machine had broken.

On the first load.

After a week away.

Within an hour of arriving home.

And that’s when I placed a desperate call to my brother, who is a fix-it kind of guy. The gift of a bottle of Irish cream did the trick, if my pleas didn’t. Within a couple of hours, he fixed the machine, and life moved on in the way it does, with one less thing to worry about.

Life went on, in that way it does, where the bumps eventually smooth out and the rips get repaired, and the stitches make us stronger somehow. We said goodbye to May and Rennie when he was well enough to fly home, and it was the hardest goodbye of all. They are all hard goodbyes, when the ones you love live so far away.

And now as Alzheimer’s and dementia have stolen them away from us in other ways, our memories of them when they were well are even more precious. I miss them. A lot.

I think it’s time for a trip to Ireland.

Goals and the end of the trail: Day 8

What you see isn't always what was submitted

If you're wondering just what it is that an editor does, most of the time it has to do with language, language choice, clarity and style guides. When I edit, my goal is to preserve the writer's voice